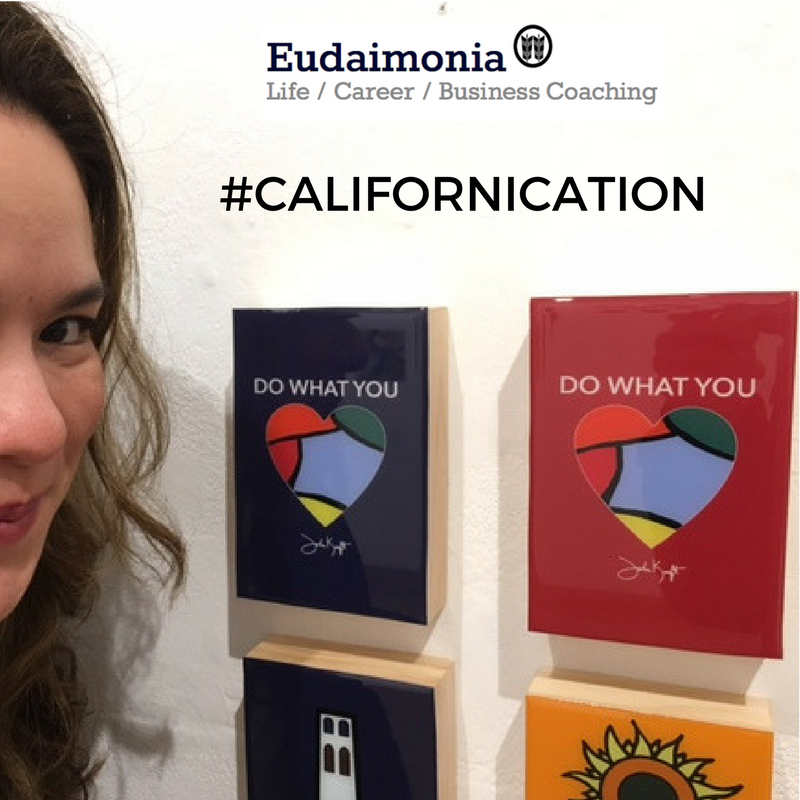 I was not excited about my Californian vacation (Californication).

I am normally flat out before the Christmas period with Birthday, Anniversary and work, that I hardly have time to get excited. I mean… going to a country where Trump was elected, was a bit worrying at the very least.

Plus I have been there before. What more could I see, or discover? My travels to the US have always been associated with weight gain and food disappointment (it does not help that being Greek-Japanese, means I have some high taste-bud standards). Spending time with my friend and her newborn baby was the only enjoyment I was truly looking forward to! Just us three, tucked away in a real home in San Francisco, pushing the pram, changing nappies, between bibs and burps, talking for hours and going for walks! Life-long friendships make me happy, plus sticking around my Greek friend meant “discovering good food too”. Hallelujah Universe! What I was not prepared for was, what California will do to my “mind”.

The two defining meetings I had in San Francisco are the theme for this Blog. The first one was with my accidental mentor and the second with my tough-cookie coach (trust me you do not want to be my coach, I can drive you crazy!). Despite our multiple Skype calls, we have finally met for the first time and it was so nice to feel the connection instantly! Americans just have their special way to make you feel as if you knew them all your life!

He is a third generation Japanese American, urban planner, script-writer and Silicon Valley veteran. He is a co-founder of the Virtual Reality (VR) startup, called One Reality AB. Amongst other activity, he is the author of 3 super inspiring and fun books, all whom I now own and recommend highly*. Recalling back, what felt like a reunion, I realise he taught me two very important things.

I asked him: Why California has produced the best companies in the world and it carries on doing so with no sign of slowing down e.g. UBER?

He said to me: “The fundamental difference between a Californian (including immigrants) and everyone else is as follows… A Californian will find a reason for something and he/she will dedicate his/her heart and soul to making it work. Everyone else will call it a “feasibility study”. They will focus on all the reasons something will not work and they will stop based on the first sign of their fears being validated (Californication Lesson #1).

Then I asked him, “I have so many ideas and so many things I am good at and that I could be doing, if I decide to dedicate myself to them. How should I make a decision and be sure to stick to it?”

He said, without hesitating for a moment, that “Success is a very personal matter. It is about climbing your very own ladder. In order to do that, you need to know who you are. And the only way to know that is…

And he showed me this picture in the Valencia Street City Art Gallery where we were just having that conversation.

“Do what you love” (Californication Lesson #2) 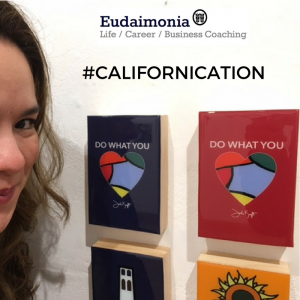 #Californication: Do what you love, Eudaimonia Coaching, Christina Garidi

2) Laura Cardosi – the tireless Coach who sees through you

Laura is my role model as a successful business coach who has also run her own wine company in Tuscany. She has a similar psycho-synthesis to me, she is Italo-American, bubbly yet she takes no bull-shit. She is a tough task-master, because she can read my thoughts like an open book. She is on my case constantly. She never stops… Sometimes I feel she cares about my success more that I do! I just did not want to let her go that night… as she fed my mind and my soul with “Californian ambrosia”.

So as we are sipping our healthy juices/teas at a buzzing Cafe on Fillmore Street, she made me aware of something that I have never thought was possible in REALITY. It made me think of how advanced San Francisco is and how far the UK still has to go!

Now imagine this: On your CV you outline your failures, one by one. You get an interview, and they hire you because of them! 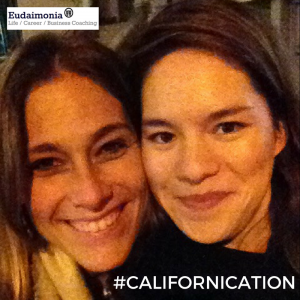 In Planet California they hire you if you show on your CV/Interview that you have failed 2 or 3 times. WHY? You have found a way of getting out of trouble, e.g. alcoholism, drug addiction etc. Think about it. Who is more valuable in an organisation? A person who never failed in their life (how will they react in their first sign of criticism or failure?) Or someone who despite the adversities found immense strength and courage to not allow the past to dictate their future? The latter is highly rewarded in California. Unless you have detoured in life and found your way back, there is no real sign of resilience.

It is not accidental that Planet San Francisco thinks that way. They have a long history of immigration. And the only way to “make it” back then during the “Gold Rush” times was to start your own business, as I have been told at the Gundlach & Bundschu winery in Sonoma Valley. Californians are proud of their Entrepreneurial Heritage and this is a constant theme in their daily lives. Every business that they interact with or is about to open, has a “story” about failure and recovery. Take a moment and imagine growing up here!

Another Bay area resident, recently taught me in Milan that “Mistakes make me smarter”! He says it best in his “Alexisms” book:

“The secret to wildly successful entrepreneurship is a blind willingness to look bad in public more often”  @AlexMandossian. (Californication Lesson #4)

California’s best export, after their global Silicon Valley businesses, is their “entrepreneurial mind”. This is what I now call: Californication.

As I was flying back, I was browsing through the airport Book Store for some inspiration… And “Cali” did not disappoint me. A notebook was patiently anticipating to delight me, with this phrase inscribed on it:

“Shoot for the moon, even if you miss, you will land among the stars.” (Californication Lesson #5)

This to me, sums up the Californian Entrepreneurial mindset for success. Aim high with no fear of judgement. There is only one way to succeed, and that is to fail first! Guess which notebook came home with me! 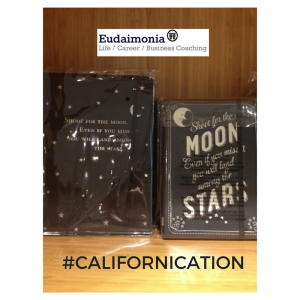 #Californication: Shoot for the moon and you might land among the stars, Eudaimonia Coaching, Christina Garidi

“Californication” is a famous song from the Red Hot Chilli Peppers and an American Sitcom with David Duchovny.

View all posts by sdfa sdfs →

One thought on “Californication”